Change A Classroom, Change A Mindset: The artistic students in Palermo use their talents to change the look of their classrooms

The artistic high school “Almeyda – Crispi” participation in Start the Change has been fruitful and based on a close collaboration with some volunteers from the Centre for Creative Development “Danilo Dolci” in order to come to a result that was surprising and satisfying for everyone involved.

STC-trained teachers alongside with the volunteers from CSC “Danilo Dolci” carried out several activities and discussion with the students of classes 2A, 3H and 4H, on Start the Change themes, such as active citizenship and inclusion, and went through all the stages from problem identification to planning SMART project ideas.

The school “Almeyda – Crispi” is located in a neighbourhood in which most of the students do not live. A strong link with the neighbourhood is therefore missing for most of the students. Instead, students looked at their immediate environment: the classrooms and the school itself. As it resulted from problem identification and discussions, students were seriously affected by the poor state of the school building.  The school is an artistic high school which means that the class rooms are often cared for poorly as it is though that it will be dirty soon anyways. Furthermore, the school is old and money is often not spend on the maintenance of the classrooms. Hence, student’s projects revolved around the idea of taking active care of the school’s spaces and environment as a mean of raising awareness among other students and school staff and invite them to do the same.

One of the classes decided to provide the classroom with curtains to shield off sun rays which made the room too hot even in wintertime as well as making the room look nicer. The other class decided to clean up their room to make a statement and promote school’s environment care. Finally, the last class wanted to have their door fixed up since it had been previously wrecked. In fixing up the door they wanted to put into practice their artistic and crafting skills to give something beautiful to their school.

In implementing their projects, students were really motivated to work together and learn how to work as a team, they also had a chance to use their artistic skills to benefit their community. This made them particularly proud of the final results they achieved. One of the students told one of the volunteers how he felt “happy to give something beautiful to the school and its future students, something that will last once I won’t be in this school anymore!”. 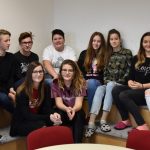 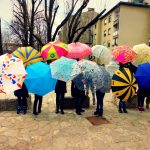 Schools in Slavonia Making the Differencenews